Atharva to pit his science knowledge against world’s best

The Year 9 studentoutperformed thousands of other students in qualifying exams and intensive training, all run remotely, to be selected in a team of six which includes students from Adelaide, Brisbane, Melbourne, Sydney and Alstonville in NSW.

The training included five week of self-paced study, followed by an intensive training camp for a group of 24 students, who had been shortlisted based on their performance in the Junior Olympiad exam. They succeeded in learning a significant portion of Year 11 and Year 12 biology, chemistry and physics concepts in just one week.

Atharve said – “It felt really exciting when I found out I had made the team, it was a great feeling after all the hard work I had put in over many months. It was also a relief”

“The process to make the team was intensive but incredibly rewarding, we put in a lot of work and learned a lot about science.”

“I enjoy everything about science, how everything fits together really nicely and how in science you always get an answer.”

Atharva said he had a lot of work coming up to prepare for the upcoming international Olympiad but said he enjoyed the “rabbit holes’ of learning about science topics.

“I would love to achieve an individual medal, a gold one in particular would be great and I hope the team can perform well for Australia,” Atharva said.

Atharva will travel to Canberra in December provided a travel permit is issued and compete in the ISJO’s individual theory exams and a team practical exam over seven days. The Australian participants will compete with other students from approximately 70 countries for gold, silver and bronze medals.

The 2021 host is the United Arab Emirates with students completing remotely from their home countries. 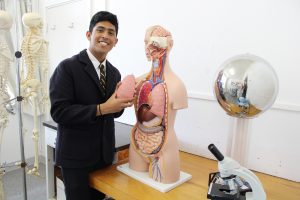