Three Perth Mod debating teams were involved in the British Parliamentary Debating Competition last night with one team in the Cygnet division and two in the Swans division.

The Cygnet team of Finn Bradfield and James Carroll in Year 8 debated well on the topic that ‘This house would restrict screen time’.

The two Swan teams were part of the most engaging Swan grand final since the competition débuted, debating the topic that ‘This house would abolish prisons’. Year 12 students Fatima Merchant and Stan;ey Jolly (Closing Government) were runner-up champions and Ann Cao and Michelle Fernihough (Opening Opposition) were named champions. Michelle also received the best speaker award.

The quality of the debate was incredible and we also acknowledge the other teams, Shenton College (Opening Government) and St Mary’s (Closing Government).

Thank you to the Western Australian Debating League for running the event and to Edith Cowan University (ECU) for supporting the event. 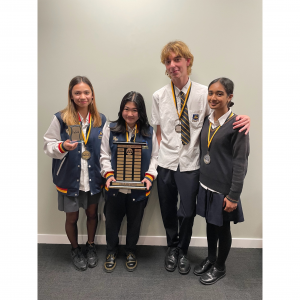 Atharva to pit his science knowledge against world’s best