Ellie adds another TWO! competition strings to her bow

Ellie Malonzo in Year 8 has won first prize in the 2022 American Music Talent Competition in the 11-14 years of age section, string category. She is also the First Prize winner of the 2022 Brisbane International Youth Music Festival Under 12’s category, announced on 1 April.

Ellie has been learning the violin since she was five years old and practices for two hours every day. She was formerly mentored by violin teacher Margaret Blades and is now fortunate to be under the tutelage of the emeritus Paul Wright, who studied at the Julliard School (New York).

She is a member of the West Australian Youth Orchestra and performs with them regularly but said she thoroughly enjoys performing as a soloist.

“I will need to increase the hours I practice as I get older,” Ellie said.

“If there was 27 hours in a day that would be nice, but it never feels like a chore to practice violin.”

Ellie was up against some of the best young violinists in the world in these competitions and submitted a recording of herself playing the third movement of the Mozart D Major concerto (No. 4) and the Spanish Dance by De Falla for the American Music Talent Competition, along with Romance in F Minor by Dvorak for the Brisbane International Youth Music Festival.

“Being able to submit performances online (Due to COVID-19) for competitions is wonderful as you can submit recordings into multiple competitions, regardless of where you live, rather than having to travel, which can get very expensive and convoluted,” Ellie said.

Ellie, who performs classical repertoire, said she wanted to be a professional [violin] soloist when she was older in conjunction with studying genetics, and thought some of her musical ability was inherited from her grandmother, who was a “great opera singer.”

“I really love the violin, as it is a way that I can express myself freely. There are no limits to what I can ‘say’,” Ellie said.

“This year I would like to keep entering competitions and hopefully keep winning,” she said. “I also want to record more repertoire so that I have a greater range of recordings to submit for competitions.”

Acting Principal of Perth Modern School Nicola Reilly said Ellie’s immense musical ability was incredible, as was her dedication to her craft.

“We look forward to hearing more about Ellie’s fantastic achievements as a violinist,” Nicola said. 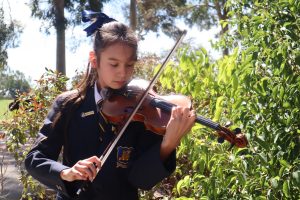