Two students from Perth Modern School have been selected for the Science Olympiads selection team for chemistry, vying for a spot to represent Australia in the Science Olympiads being hosted by Japan.
Gabriel Raharjo, 16 and Keith Wong, 17, were first invited to sit the Australian Chemistry Olympiad exam based on their school chemistry results. After performing well in that exam, they were invited to attend the Australian Chemistry Olympiad Summer School during the school holidays along with 27 students from around Australia. Another Perth Modern student, Joshua Soon, 15, also sat the summer school exam, receiving a Bronze level certificate for placing in the top 19 students Australia-wide.
At the end of the summer school, they sat two four-hour final selection exams based on the content covered in the summer school. Topics in the exam included thermodynamics, quantum mechanics, analytical chemistry, kinetics, biochemistry and organic chemistry.

Gabriel said he found the exams to be “extremely challenging and the content to be far beyond the scope of anything I had done before.”

“I found the chemistry at the summer school really interesting, as it allowed me to understand certain concepts we learnt at school on a more fundamental level,” Gabriel said. “I find chemistry in general to be the right balance between the conceptual sciences like physics and math, and the practical sciences like biology.”

Keith said he enjoyed chemistry as a subject as it “provides a way for us to account for things that occur in everyday life as well as things that seem like magic, which I find very satisfying.”

“I hope to be selected to be part of the Australian team for the International Chemistry Olympiad, which was going to be held in Osaka this year but was made into a purely remote exam due to COVID concerns,” Keith said. “This would involve me being within the top four out of the 10 still in the programs after we complete the final examination.”

Gabriel said he was initially surprised to have been selected for the ten-person Olympiads selection team as he felt he had not performed well in the examinations as the questions were so challenging.

“Now, I am mostly excited at the opportunity to further expand my knowledge of chemistry and potentially represent Australia,” Gabriel said. 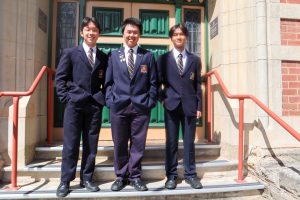