At just 16, Kingsley schoolboy Jamie Laubbacher has become the youngest person to take out the WA Open Championship.

Chess has a tradition of young stars, most famously Bobby Fischer, who became US Chess Champion at 14. But far from fulfilling the stereotype of a child prodigy who could play as soon as he could walk, Jamie only took up chess seriously two or three years ago.

“I just got into it, it seemed like a good hobby,” he said. “(Before a competition) I play as much as I can. Whenever I have some spare time, on the way to school, when I get home.”

He went into Sunday’s final game — the culmination of a seven-week tournament — feeling nervous but confident and said it felt “great” to win.

Chess Association of WA councillor Ian McAteer said in the last 20 years the youngest State champion was 18-year-old Yita Choong in 2007 and he was not aware of anyone younger who had ever won the title.

“In international terms there are superstar kids who get to grandmaster status as young as 15, but in a small chess community like Perth this is quite unusual,” he said.

Parents Lisa and Beat were not present to watch Jamie’s victory for fear of making him nervous: a nail-biting exercise in patience for the pair, who waited nervously in the carpark to learn their son’s fate. 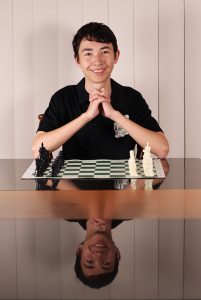