The Year 8 trio’s team called the Golden Sphynx had come up with a winning invention using artificial intelligence featuring an ear piece and a ring that coordinated together to determine using programmable data if an individual was suffering a panic attack. Examples of what it could detect would be blood pressure and facial expression.

The technology would then hep that person by providing soothing words and/or music that would help alleviate the panic attack symptoms. The team had to submit a PowerPoint presentation to the panel of judges on their idea.

“The competition involved how to use artificial intelligence to innovate a solution to help solve a problem in the world,” Avishi said. “Our team wanted to come up with a health related innovation.”

“The invention would have a lot of technological functions to help people who suffer from panic attacks.”

“This invention would also use a lot of personal data to tailor a solution to the individual person.”

“The best part of participating in the competition for me was working with other team members, brainstorming ideas,” Samah said.

“It was incredible to find out we were one of the ten national winners,” Carter said. “I felt numb when I first heard the news as I couldn’t believe it.” 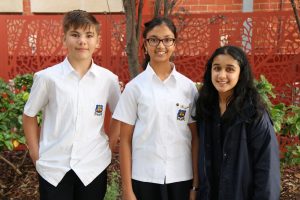